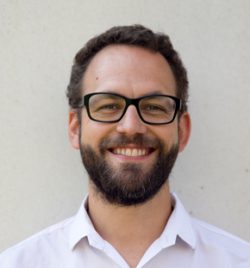 Håkan Westergren (class of 2018) is a student in the M Arch I Program.

The architect Steven Holl told me it was a good idea, and who am I to argue with him? A number of other architects I spoke to also made a point of stating that they loved hiring from SSA.

I majored in Political Science at SUNY Purchase and I worked as a sommelier, restaurant manager, and wine buyer for many years. This gave me the opportunity to meet lots of interesting architects, albeit only while in their cups.

So far, my first semester studio class with Professor Brad Horn, in particular our final project. Maybe this is simply because the first semester learning curve was so steep; everything else in life receded for a while. It is nice to be learning incrementally again, though.

Raising a two-year-old girl is occupying a majority of my “free” time; I also enjoyed a part-time unpaid internship over the summer. If I am really stressed out I will edit Wikipedia until I feel better.

Counterintuitively, learning is getting easier as I grow older. Also, there are a lot of corners that need to be cut: obsessively moving curve points in Illustrator for an object that will be printed at less than a square inch is never a good way to spend one’s very limited time.