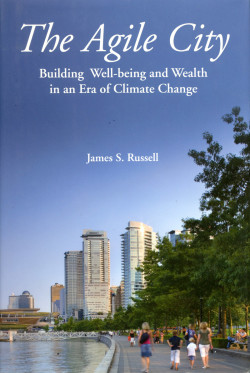 Building Well-being and Wealth in an Era of Climate Change

In a very short time America has realized that global warming poses real challenges to the nation’s future. The Agile City engages the fundamental question: what to do about it?

Rapidly improving building techniques can readily cut carbon emissions by half, and some can get to zero. These cuts can be affordably achieved in the windshield-shattering heat of the desert and the bone-chilling cold of the north. Intelligently designing our towns could reduce marathon commutes and child chauffeuring to a few miles or eliminate it entirely. Agility, Russell argues, also means learning to adapt to the effects of climate change, which means redesigning the obsolete ways real estate is financed; housing subsidies are distributed; transportation is provided; and water is obtained, distributed and disposed of. These engines of growth have become increasingly more dysfunctional both economically and environmentally.

The Agile City highlights tactics that create multiplier effects, which means that ecologically driven change can shore-up economic opportunity, can make more productive workplaces, and can help revive neglected communities. Being able to look at multiple effects and multiple benefits of political choices and private investments is essential to assuring wealth and well-being in the future. Green, Russell writes, grows the future.