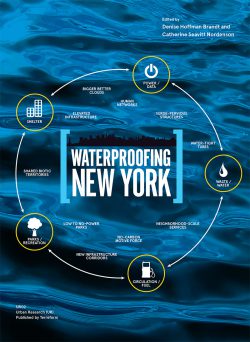 Waterproofing New York gathers some of the most influential and thought provoking municipal leaders, engineers, planners, social scientists, and designers to explore the impact of past and future storms on New York City’s infrastructural systems: Water/Waste, Power/Data, Circulation/Fuel, Parks/Recreation, and Shelter. The essays use the operating systems of the city to open speculation on the possibilities of waterproofing New York, and even thinking beyond waterproofing, as an act of coordinated yet opportunistic, pragmatic, and inventive city design. The publication is intended to support an emerging skepticism of a singular big “fix” and of the unplanned, uncoordinated shoring up of individual enterprises and discreet sites that will ensue in the absence of design and civic leadership.