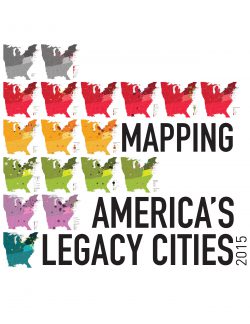 Mapping American Legacy Cities (2015) is a comparative data report analyzing the urban trends of population loss, race and ethnicity, residential density and vaccy, unemployment and income for 48 Legacy Cities in the United States.  Legacy Cities are cities greater than 50,000 in population that have lost over 20% of their population since peak levels.