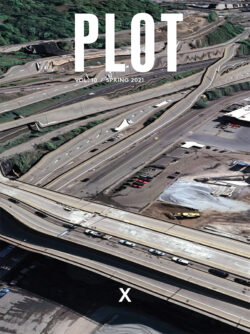 The tenth volume of PLOT appropriately celebrates the tenth anniversary with the theme of X. Sure, it’s the Roman numeral for the volume number. But X is also a generic variable, something that stands in for an unknown numerical value that may change within the context of a mathematical equation or experiment. X rings with the sound of the ancient Greek prefix, έχ, which becomes ex- in English, connoting a sense of being “out of” or “outside of,” as expressed in words such as exorcism and exodus. It even trails into ecstasy, as when one is “out of stasis” with joy. In pirate lore, X marks the spot: an exact location of treasure marked on a map. X can also mask identity, running cover for the ambiguous, confusing, and mystifying. It can even stand in for what might seem unknowable. The abstraction of X leads to many meanings –esoteric, mystical, and mysterious.

This year’s faculty editor Michael King, along with second year MLA student editors Emily Cote, Abby Stein, and Michael Yoken, with design by Isaac Gertman / The Independent Group, have produced an extraordinarily excellent issue. Channeling Frederick Law Olmsted, who wrote his observations of the Cotton Kingdom under the pen name pseudonyms of Wayfarer, Yeoman, and Menhaden, the observant reader of PLOT X will note a number of contributions written under various authorial guises. We challenge you to solve for X.