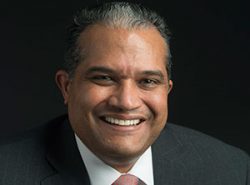 Dr. Feniosky Peña-Mora is the Commissioner of the New York City Department of Design and Construction, the nation’s largest civic design and construction project management agency. DDC has completed more than 3,700 projects with an approximate value of $15 billion. As Commissioner, Peña-Mora directs a $15 billion active portfolio of 1,200 resilient sustainable construction projects. This portfolio will expand to nearly $17 billion over the next five years.

Prior to joining DDC, Peña-Mora served as the Edwin Howard Armstrong Professor of Civil Engineering and Engineering Mechanics, the Professor of Earth and Environmental Engineering, and the Professor of Computer Science at Columbia University. Previous to his tenure at Columbia, he was an associate provost and the Gutgsell Endowed Professor at the University of Illinois at Urbana-Champaign. Before Illinois, Peña-Mora was the Gilbert W. Winslow Career Development Associate Professor at the Massachusetts Institute of Technology, where he also earned his master of science and doctor of science degrees in civil engineering in 1991 and 1994.

His research includes information technology support for preparedness, response, and recovery during critical physical infrastructures disasters. His work has earned him an international reputation for change management, conflict resolution, sustainable construction, and processes integration during the design and development of large civil engineering systems. Peña-Mora was the chief information technology consultant on the Boston Central Artery Third Harbor Tunnel Project, where he focused on information technology support for change management and process integration during the design and construction phases of the $14.8 billion, two-decade long engineering endeavor.

Peña-Mora is the author or co-author of more than 200 scholarly publications. He holds six patents and one provisional patent. As a professional engineer registered in the Dominican Republic, he is a key figure in high-profile international projects and companies.