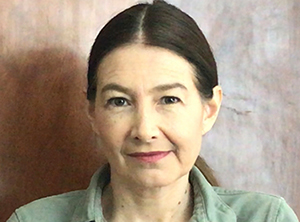 Please join us for the new SCIAME Global Spotlight Lecture Series, titled Far South. Curated by Associate Professor Fabian Llonch, the series features prominent architects from South America who will discuss their work and the unique political and environmental challenges they face. "Grounded" will be presented by Alexia León, founder of Alexia León arquitectos and the Leonmarcial arquitectos. An introduction will be led by Alberto Foyo.

To join the event, please follow the Zoom link here.

León, born in Lima, received her undergraduate degree in architecture and urbanism at the Ricardo Palma University in 2001 and a master's degree at Pontificia Universidad Católica in Perú. She opened Alexia León arquitectos and Leondelima workshop in 2006. Her first built work, the Mori House in Playa Bonita (1996-1998; Cañete, Lima), was chosen as one of the six finalists in the Mies van der Rohe Prize for Latin American Architecture (2000). The Vertical House (2000-2005; San Isidro, Lima) was nominated for outstanding project in the inaugural Mies Crown Hall Americas Prize (MCHAP) in 2014.

León taught as visiting professor at the Graduate School of Design at Harvard University (2007) after which she received an UFI research grant from the MAK Center in Los Angeles. She has participated in the symposium “Crossing: Dialogues for Emergency Architecture” at the National Art Museum of China in Beijing and was nominated for the Marcus Prize for architecture in 2009. Recently, León was nominated for the BSI-Swiss Architectural Award under the patronage of the Federal Office for Culture of the Swiss Confederation and of the Academy of Architecture in Mendrisio at Università della Svizzera in Italy (2016). She has given lectures and workshops in several universities, both in Perú and abroad.

Lecture series sponsored by Sciame . . . Where Building Is an Art