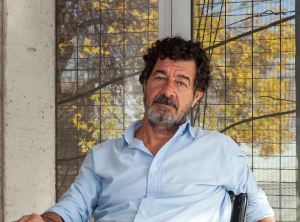 Please join us for the new SCIAME Global Spotlight Lecture Series, titled Far South. Curated by Associate Professor Fabian Llonch the series features prominent architects from South America who will discuss their work and the unique political and environmental challenges they face. The first in this series, "The Circular Horizon," will be presented by Gerardo Caballero, Argentinian architect and 2019 first prize winner for the Argentine Pavilion in the 17th International Architecture Exhibition, La Biennale di Venezia. An introduction will be led by Dean Lesley Lokko.

To join the event, please follow the Zoom link here.

Born in Totoras, Argentina, Caballero graduated from the National University of Rosario and has been practicing architecture since 1982. He first became a collaborator at Studio Shiira-Albano before joining Studio Corea-Gallardo-Mannino, in Barcelona. After completing his Master of Architecture degree at Washington University in Saint Louis, he became a founding member of Grupo R, in Rosario in 1988, which was first prominently associated with Ariel Gimenez Rita from 1988 to 1992, and then Maite Fernández from 1993 to 2013, and has been run independently by Caballero since 2013.

Caballero has received over 30 awards and honorific mentions in national and international architectural competitions. In 2006, he was honored by the city of Totoras, and in 2011 he received the award Argentine Architecture by the International Architectural Biennial of Buenos Aires. During the 2002-2006 Quinquennial of Architecture, his studio was awared honors by the Konex Foundation for his work in Argentina. He was subsequently awarded with an honorary diploma by the Santa Fe Province in recognition of his X BIAU prize in São Paulo, Brazil. He has also been a guest lecturer in numerous universities, including the Harvard School of Design, the Superior Technical School of Architecture in Pamplona, the Pontifical Catholic University of Chile, and the Lebanese American University in Beirut, among others, and has been a professor in the International Program for Graduates offered by Washington University in Barcelona and Buenos Aires since 1993.

Lecture series sponsored by Sciame . . . Where Building Is an Art