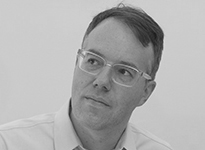 Michael Meredith is co-founder of MOS, along with Hilary Sample. Located in New York City, MOS is an architecture practice known to produce work that challenges the boundaries between architecture, art, and technology. MOS has received numerous awards, including a Holcim Award and 2013 AIA New York State Citation for Design for the Lali Gurans Orphanage in Kathmandu, Nepal, the Architecture Award given annually by the American Academy of Arts and Letters; was named one of North America’s “Emerging Voices” by the Architectural League of New York as well as “Avant Guardian” by Surface Magazine. The firm has been featured by The Creator’s Project and in exhibitions at the Museum of Modern Art, the Venice Architectural Biennale, the Wexner Center, the Cooper-Hewitt Museum, the Shenzen Architectural Biennale, Institute of Contemporary Art in Boston, and the Art Institute in Chicago. The firm’s first monograph, Everything All at Once: The Software, Video, and Architecture of MOS, is published by Princeton Architectural Press.