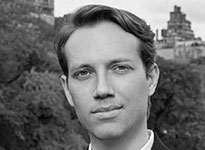 Anthony Acciavatti is a historian, architect, and cartographer. He is an Adjunct Professor at Columbia University in the City of New York and is a principal of the design and research firm Somatic Collaborative as well as an editor ofManifest: A Journal of American Architecture and Urbanism. His most recent book, Ganges Water Machine: Designing New India’s Ancient River (2015), is a dynamic atlas of the Ganges River basin—the first such comprehensive atlas in half a century—based on a decade of fieldwork and archival research begun as a Fulbright Fellow in 2005. His account of infrastructure, architecture, landscape, population, and climate is the basis of a traveling exhibition that has appeared in museums and biennials, with two more exhibitions planned in New Delhi and New York by the end of 2016. At a time when the Government of India is beginning to invest a $1.5 billion loan from the World Bank to clean up the Ganges River, the book and exhibition can serve as a guidebook to better understand and respond to environmental conditions and their social impacts.