SCALAR ECOLOGIES: Made in Spain Conference 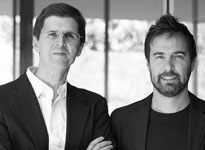 Alberto Veiga, born in 1973, grew up in Santiago de Compostela, Spain, and studied architecture at the Escuela Técnica Superior de Arquitectura de Navarra. Between 2007 and 2010 he was Professor at the International University of Catalonia in Barcelona. In 2014 he was Visiting Professor at the Istituto Universitario di Architettura di Venezia.