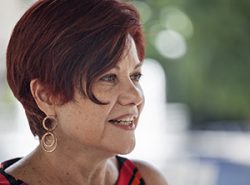 Celeste is a cultural historian dedicated to rescuing lost causes. Her first book, Megalopolis: Contemporary Cultural Sensibilities (1992) was an immediate success as it explained popular urban culture and postmodernity in an informed yet accessible way. Megalopolis mapped out Celeste's future topics (particularly modern ruins and kitsch) and became a cult classic. It was translated to several languages and is still being reprinted today. Her second book, The Artificial Kingdom: A Treasury of the Kitsch Experience (1998) presented kitsch as a cultural sensibility and a product of industrialization, steering this phenomenon away from the good taste/bad taste discussion and showing its complexity as a modern phenomenon. It has also been translated to several languages. In 2013, Celeste founded PROYECTO HELICOIDE in the hopes of making visible the extraordinary modern ruin of El Helicoide, in Caracas. The project has produced award-winning exhibitions and fueled Downward Spiral: El Helicoide's Descent From Mall to Prison (Terreform/Urban Research), co-edited with Lisa Blackmore. Celeste has also received Guggenheim and Rockefeller awards.