"Transience Across Scales: Some Reflection from India" in conversation with Filiep Decorte 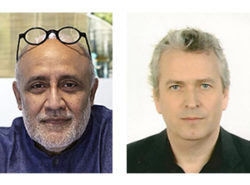 Rahul Mehrotra will be joined in conversation with Filiep Decorte, followed by a response from guest provocateur Deen Sharp. The evening will be moderated by Loukia Tsafoulia and Adjunct Associate Professor Suzan Wines.

Rahul Mehrotra is a practicing architect, urban designer and educator. He works in Mumbai and Boston, and teaches at the Graduate School of Design at Harvard University where he is professor of urban design and planning. His practice, RMA Architects (www.RMAarchitects.com), founded in 1990, has executed a range of projects: corporate office buildings, a library, a lab building, university buildings, and a series of social advocacy initiatives including community toilets and a low-income housing project for elephants and their keepers, commonly referred to as mahouts. RMA Architects has also initiated several unsolicited projects driven by the firm’s commitment to advocacy in the city of Mumbai. Mehrotra has written, co-authored and edited a vast repertoire of books on Mumbai, its urban history, historic buildings, public spaces and planning processes.

Filiep Decorte is currently the Deputy Director of UN-Habitat’s New York Liaison Office and the focal point for UN-Habitat’s crisis-related work in New York. He was acting Director from December 2016 to February 2018. He played a key role in developing an urban track towards the World Humanitarian Summit and the emerging Global Alliance for Urban Crises.

During his career, Filiep has predominantly focused on urban initiatives in conflict- and crisis-affected countries, specializing in urban planning, land, and housing issues. He globally focuses on migration, displacement, land and conflict and the humanitarian -development nexus. He has worked for UN-Habitat for more than fifteen years in different capacities, including long-term assignments in Haiti, the occupied Palestinian territory, Somalia, and Morocco. He also acted as coordinator for UN-Habitat’s Global Disaster Management Program. He was trained as a civil engineer, architect, and urban and regional planner with advanced master’s degrees from the Universities of Ghent and Leuven in Belgium.

Deen Sharp is a post-doctoral Fellow at the Aga Khan Program for Islamic Architecture at MIT and co-editor of Beyond the Square: Urbanism and the Arab Uprisings (UR Books, 2016).