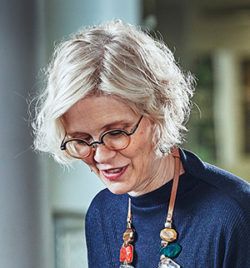 Professor and Department Chair June Williamson: In Her Own Words

June Williamson, who was elected to a three-year term as architecture department chair starting in July 2019, has been a member of the faculty since 2008 and previously completed the MUP in Urban Design Program here at Spitzer. Her research and teaching focus is on urban analysis, housing design, redesigning suburban form, sustainable urbanism, and related topics. The next book in her “Retrofitting Suburbia” series, co-authored with Ellen Dunham-Jones, will be published by Wiley by the end of the year. This interview was conducted by Erica Wszolek, executive associate to the Dean and communications manager, in September 2020.

“A real skill in teaching is to learn when to pause and stop talking.” – June Williamson

EW: Why did you decide to run for department chair?

JW: It was a difficult decision. It’s a huge responsibility, and I’m the kind of person that, if I take something on, I want to do it fully and well. I was also influenced by the upcoming transition and the expectation of a new dean. We didn’t know who it would be, so there was a sense of embarking on the unknown. But I recognized that I certainly had the capability and the skill, and it seemed to be appropriate after being at Spitzer for many years, having participated in a lot of committees, playing a key role in accreditation, but not having been up in front. I also reflected on research that shows that women can be tentative about putting themselves forward for leadership positions. I thought, put my hat in the ring and see where it goes.

EW: That’s very true. When I was in grad school we had this conversation about how women need to have ideas and questions fully baked before we raise our hand or discuss it. Meanwhile it’s shown that men share their thoughts while they’re working it out. And I found that that’s exactly what I do. I have to sit with it to make sure what I’m saying makes sense. I go over it a million times in my head and then the conversation is over. I’ve missed my opportunity to discuss it!

JW: This has been shown in the political arena as well — that women who aspire to higher office often wait until they feel like they have all the training and necessary experience, which puts them years behind their male counterparts.

EW: So, you are one full year into your three-year post as departmental chair. Can you reflect on your first year and talk about what your ambitions for the next two years are?

JW: In the whirlwind working conditions of now, it just feels like the tasks have multiplied and it’s hard to find the time to reflect, frankly. It feels like I haven’t had a break or a pause since I started. However, when I do take a few moments to think back, I feel like some of the ambitions that I had for the position have been realized. The goal was to be as supportive as possible, certainly for the faculty who I represent as their elected chair — the full-time faculty — but expanding to the adjunct faculty as well, trying to put more support structures and clearer advising in place for them, and extending that to the students, advising, and the whole school community. I started the newsletter called The SCAN, which is the Spitzer Chair of Architecture Newsletter. My husband is an astronomer, and they often start with the acronym when they name a new project or a telescope and then they work the words out afterwards that make the acronym. I feel very proud of progress that’s been made in organizing the tasks of the Chair’s Office so that we can fulfill them better and use the whole staff efficiently and in a supportive way. As far as the ambitions for the next year and a half – we’re approaching the halfway mark in my term – one is to hope that some of this will be less labor intensive as it becomes more routine. And that, I hope, will of course free up some more of my time and others’ time to not just be fulfilling routine tasks but to be opening up to all the possibilities and potentials of our fabulous community.

EW: What insights from your teaching and professional experience were you able to integrate or adopt as department chair?

JW: That’s an interesting question. I think there are very different kinds of day-to-day tasks. The full-time faculty member works a lot in isolation at home, reflecting and preparing for teaching. So, actually, working at home is not such a disconnect to what my life was like before I took on the chair’s role. When I teach, I try and keep everything well prepared so that it opens up space for students to have free conversation. A real skill in teaching is to learn when to pause and stop talking to allow the student who is formulating her idea to find the space to express it and share it. I like to think that I’m using some of those skills learned in the classroom in other types of settings — there are a lot of meetings as a chair — without losing sight of bigger questions. And I think that’s always got to be present in teaching as well, that one doesn’t just pull up the same old syllabus and readings and exercises but is constantly refreshing and revising and updating and revisiting.

EW: My last question is, I understand you have a new book coming out. Can you talk a little about what readers can expect?

JW: Sure! The new book is called Case Studies in Retrofitting Suburbia. It’s the next in a decade-long series now. It’s been six years in the making, this new book, quite a long process, and the publication date is in early December, so it’s coming out soon.

JW: Thank you. The new book brings up a number of urgent challenges in the retrofitting suburbia agenda — some of the pressing issues of our time: recognizing that already for most of the twentieth century, the majority of northern Americans live in suburban settings and that these places are highly diverse but also challenged, so trying to raise the bar on ways that the built environment should be rethought and retrofitted with respect to decreasing our dependence on automobiles; on exploring intersections of physical design and public health, building on research that shows how the suburban environment, as it was built in the late twentieth century, is making us sick and ways that design can improve that. Also recognizing that baby boomers are entering retirement and staying in suburbs — so thinking about the shifting demographics and aging in suburbs as a design challenge. Also retrofitting for jobs. Most people live in the suburbs, most people work in the suburbs, and you’ve got these office parks that are obsolete, that need rethinking. Also the environment, most specifically dealing with storm water and energy use and incorporating new design and engineering knowledge in suburban settings.

And, finally, a focus on leveraging social capital, most specifically with respect to disadvantaged communities, of which there are many in suburbs, counter to persistent stereotypes. The ethnoburbs, the immigrant communities that increasingly go straight to suburban settings to settle. The legacy of Black suburbs and trying to overcome persistent effects of past patterns of segregation and other kinds of exclusionary tactics that have been commonly used in suburban jurisdictions. So all of that stuff together, it’s a lot of stuff! Together there are 32 new case studies, which address one or more of these challenges in interesting ways.

EW: I do have a question because you mentioned office space and right now we are all working from home, which I think adds an extra layer of complexity, because we know that it is possible. I mean, we’ve been doing it for six months! Do you think this moment will create more flexibility around productivity that doesn’t require a building with dedicated office space?

JW: I think a lot of these things are going to be rethought. One of the legacies of twentieth century suburban planning is the separation of uses. There’s a long history, which I get into in the Retrofitting Suburbia seminar that I teach, about the gendered separation of spheres. The domestic sphere was feminine, the suburb was the home, and the work place, the city, was masculine. There was a need for separating those things by commuting. All sorts of rationales, basically, for the logic of separation. Those are already troubled on a number of fronts: shopping online, two-parent working households, different ways of commuting. Commuting to the center of the city and going back to the bedroom suburb is gone already for most.

But I think there could be real opportunities for restructuring the work week, which could transform the congestion associated with commuting, and could allow us to more inventively rethink mobility. But people still need people, and I think researchers understand that proximity and physical connection are important to creativity and productivity, so there will be, I think, pushes for ways to rethink the physical and built environment so that kind of connection happens. And you can see it right now, even if we’re working at home, we’re compelled to go out and eat outside in the middle of the street and work that way too if we have to. One of the themes in the book is about third places, conventionally lacking in suburbs. You might have the place where you work, the place where you shop, the place where you live, but where do people mix and hang out that isn’t task driven? And so we have the rise of the coffee shop, to meet a need. We may want to be alone, but with other people around.