Public Spaces in Disguise + I Dream of Transparent Cities 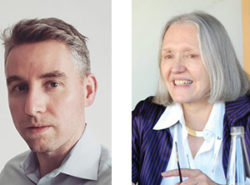 Håvard Breivik is an architect, assistant professor at the Oslo School of Architecture and Design (AHO), and member of the Norwegian Refugee Council’s emergency standby roster, NORCAP. With a decade of experience from crisis response, humanitarian relief, and development efforts, Håvard has been deployed to United Nations agencies in Haiti, Nepal, North Macedonia, Hungary, and New York. Håvard is currently the focal point for Academia and the Built Environment at the Global Alliance for Urban Crises, while being responsible for the master’s course 'In Transit Studio' at the Institute of Urbanism and Landscape at AHO. He has studied in Shanghai and Paris as a part of his master’s degree in Architecture from AHO’s Institute of Urbanism and Landscape.

Saskia Sassen is the Robert S. Lynd Professor of Sociology and Member, The Committee on Global Thought, Columbia University (www.saskiasassen.com). Her new book is Expulsions: Brutality and Complexity in the Global Economy (Harvard University Press 2014) now out in 15 languages. Recent books are Territory, Authority, Rights: From Medieval to Global Assemblages ( Princeton University Press 2008), A Sociology of Globalization (W.W.Norton 2007), and the 5th fully updated edition of Cities in a World Economy (Sage 2018). Among older books are The Global City (Princeton University Press 1991/2001), and Guests and Aliens (New Press 1999). Her books are translated into over 20 languages. She is the recipient of diverse awards and mentions, including multiple doctor honoris causa, named lectures, and being selected as one of the top global thinkers on diverse lists. She was awarded the Principe de Asturias 2013 Prize in the Social Sciences and made a member of the Royal Academy of the Sciences of Netherland.

Short presentations by each speaker will be followed by a response from guest provocateur Associate Professor Julio Salcedo, Director of the Graduate Urban Design Program. The evening will be moderated by Adjunct Associate Professor Suzan Wines and Loukia Tsafoulia.

The lecture/discussion will be immediately followed by a book launch celebration for Transient Spaces beginning at 7:00 p.m. Excerpts from the book will be on view and copies of the book will be available at this event.