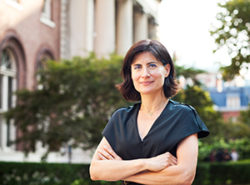 Amale Andraos is Dean of the Columbia University Graduate School of Architecture, Planning and Preservation (Columbia GSAPP) and co-founder of WORKac, with her partner Dan Wood. Based in New York City, their projects focus on reinventing the relationship between urban and natural environments. WORKac recently completed the Kew Gardens Hill Library, Queens; PS7 Edible Schoolyard, Harlem; and the Collage Garage in Miami’s Design District. Large-scale international projects include the winning competition entry for a Conference Center in Libreville, Gabon and a new residential development in Batroun, Lebanon, among others. Their work has been exhibited at The Museum of Modern Art, Canadian Centre for Architecture, and is regularly featured at international biennials. The firm has received numerous awards, and Andraos was named a 2017 Game Changer by Metropolis Magazine.

Amale Andraos has taught and lectured extensively, and her publications include 49 Cities (3rd edition by Inventory Press, 2016) and Above the Pavement the Farm! (Princeton Architectural Press, 2009), both co-authored by Dan Wood, and The Arab City: Architecture and Representation (Columbia Books on Architecture and the City, 2016), co-edited by Nora Akawi. Monacelli Press published the book We’ll Get There When We Cross That Bridge about WORKac in 2017.